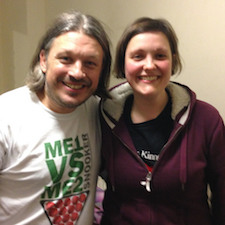 RHLSTP #41: Josie Long – Fruit Pastille Lolly. After being unnecessarily rude to his audience again, Richard introduces this week’s guest, comedian, cartoonist and film maker, Josie Long. They chat about sharing car journeys with Stewart Lee‘s misbehaving (embodied) anus, how to respond to Twitter abuse, suncream that beams into your hand and killing Hitler by pushing his eye into his brain. Plus there’s an extraordinary story of an almost impossible survival of a spectacular car crash that leaves it uncertain as to whether Josie is actually just a ghost. Plus more odd dirty britcom confessions and the weirdness of Josie being told them by the bloke from Fist of Fun.